4TH PRESIDENT OF THE REPUBLIC OF CROATIA 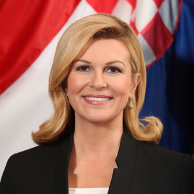 Kolinda Grabar-Kitarović is the 4th and 1st female President of the Republic of Croatia (2015-2020). She has pushed many a glass ceiling, having served, among other, as the first female Assistant Secretary General of the North Atlantic Treaty Organization (NATO), as well as Croatia’s first female Minister of Foreign Affairs and Ambassador to the United States of America. Parallel to her diplomatic and political careers, she has pursued an academic career in government, international relations and security studies at the Vienna Diplomatic Academy, George Washington University, Harvard University, Johns Hopkins University and the University of Zagreb. She is a recipient of the Fulbright Lifetime Achievement Award and a number of national and international awards, decorations, honorary doctorates and honorary citizenships.

Kolinda Grabar-Kitarović began her professional career in 1992 at the Croatian Ministry of Science and Technology, and in 1993 transferred to the Ministry of Foreign Affairs, where she moved up through several positions – from adviser and subsequently head of Office of the Deputy Minister (1993-1995) to Director of Department for North America (1995-1997). In 1997 she was posted to the Croatian Embassy in Ottawa, Canada, as Counsellor, to be promoted to Minister-Counsellor. From 2001 to 2003 she served as Minister Counsellor at the Ministry of Foreign Affairs (on Fulbright scholarship during the 2002/2003 academic year.)

In November 2003 she was elected to Parliament. A month later she was sworn in as Minister of European Integration, and in early 2005 as Minister of Foreign Affairs and European Integration, managing the merger of the two ministries. The major objective of her term was to lead Croatia on its path to the European Union and NATO. Having obtained a positive opinion of the European Commission and candidature status for Croatia, as Head of the State Delegation for Negotiations on the Accession of the Republic of Croatia to the European Union, she played an instrumental role in opening and leading Croatia’s negotiation process until the end of her term-in-office in 2008. During her tenure as Minister of Foreign Affairs and European Integration, Kolinda Grabar-Kitarović led a successful campaign for Croatia’s non-permanent UN Security Council membership for the 2008/2009 term. With the OSCE Ambassador to Croatia she co-presided over the platform of co-operation between the Croatian line ministries and the member states of the Organization for Security and Cooperation in Europe (OSCE) on resolving the remaining open issues, leading to a successful closing of the OSCE mission in Croatia by the end of 2007. As the person in charge of the absorption of foreign funds, coordinator of the EU pre-accession funding to Croatia and coordinator of overall bilateral assistance to Croatia, she introduced on-line platforms for interactive project presentation and direct communication between the entities seeking funding and donors, which increased the transparency, speed and efficiency of the process. Among other, she was also the chairperson-in-office of the Southeast European Cooperation Process (2006/2007), presided over the Ottawa Convention (2005) and briefly acted as Vice-President of the UN General Assembly on behalf of Croatia (September 2006). She invested special effort in sharing Croatia’s experience in post-conflict reconciliation and brought delegations of female politicians and public personalities from Afghanistan and Iraq for study visits in Croatia, as well as public servants from Iraq and Afghanistan to the Diplomatic Academy in Zagreb.

In 2008 Kolinda Grabar-Kitarović was posted as Ambassador of the Republic of Croatia to the United States of America, during which period Croatia concluded negotiations and became a member of NATO.

In 2011, following a NATO-wide competition, she was selected for the position of NATO Assistant Secretary General for Public Diplomacy, as the first woman Assistant Secretary General ever in the history of NATO and the highest-ranking woman in NATO up to that point. She was part of NATO Senior Leadership and was in charge of transforming NATO’s Public Diplomacy Division in times of austerity and rising public skepticism. She managed NATO Channel TV, as well as other NATO media. She was a member of the Academic Advisory Board of the NATO Defense College in Rome, where she also held lectures. She played an active role in organizing, promoting and managing public opinion with respect to NATO’s summits in Chicago (2012) and in Wales (2014). She spent considerable time on the ground in Afghanistan with the ISAF and Resolute Support missions, and working with Afghan leaders and the NGO sector in promoting transparency, gender equality and empowerment of women, education and equal opportunities. She managed the Virtual Silk Afghanistan program, bringing broadband Internet to over 20 Afghan universities and a number of schools and other institutions, investing special effort in providing opportunities for women students and entrepreneurs to study and work on-line.

On 11th January 2015 she was elected President of Croatia. As a champion of change, during her presidency she continued her work not only for the benefit of Croatia and Croatia’s position in the word, but also on many issues of global importance. She actively pursued solutions to her country’s challenges, such as demographics, decentralization, gender equality, reform of the education system, digitalization and the overall modernization of society. Throughout her presidency she forged strong relationships with her colleagues and world leaders, building networks across the world and actively seeking solutions to regional and global issues. She was a frequent guest at the United Nations, promoting the implementation of the Sustainable Development Goals, in particular with respect to peace and security, reducing inequality and increasing opportunities, gender equality and education, energy and environmental protection. She participated in the work of the Arraiolos Group of European Presidents, dealing with questions and problems concerning the current state and future development of the EU as well as how to approach the challenges of globalization. Among her numerous international initiatives, in 2015, together with the President of Poland, she launched the Three Seas Initiative, a platform for stronger cooperation of 12 European Union Member States from Central Europe in between the Baltic, Adriatic and Black Seas, with the aim of increasing cohesion, competitiveness and convergence of their economies through enhancing their infrastructure in the fields of energy, transportation and digitalization, and thus erasing the still present physical and perceptual differences between Europe’s “East” and “West” and strengthening European resilience overall. Many countries outside of the region, as well as a number of international and European financial institutions, recognized the importance of the Three Seas Initiative, and the United States and Germany joined the Initiative as partners. President Grabar-Kitarović also co-presided over the Brdo-Brijuni process with her Slovenian colleague, aimed at further reconciliation, resolution of open issues and future membership of the countries of the Western Balkans in the EU. In 2019 she was appointed the Chair of the Council of Women World Leaders, a network of directly elected current and former female Presidents and Prime Ministers. She remains chair emerita and a member of the Council.

In March of 2020 she became a member of the International Advisory Board of the US Atlantic Council, a Washington DC based nonpartisan organization that promotes partnership of the US leadership with partners and allies around the world in shaping solutions to global challenges.

She is also a member of the Board of Trustees of the Friends of Europe, an independent Brussels based think-tank for EU policy analysis, debate and policy recommendations.

On 17th July 2020 Kolinda Grabar-Kitarović was elected an independent Member of the International Olympic Committee (IOC). She was appointed a member of the Future Hosts Commission for the Games of the Olympiad, which explores, creates and oversees global interest in future Olympic Games and advises and provides recommendations to the IOC Executive Board in regard to future hosts for Olympic Games, and of the Public Affairs and Social Development through Sport Commission.

In an effort to deal with the short and long-term effects of the COVID-19 pandemic, in 2020 she was appointed one of the two global Ambassadors on Immunization by the Women Political Leaders, a global network of female political leaders committed to advancing society. The immunization initiative is aimed not only at the implementation of COVID-19 immunization programs, but also at protecting the lives and livelihoods of our citizens across the globe as immunization is an area which has been devastated by the pandemic, and millions of children have not received routine childhood vaccinations.

In October 2020 she was appointed Chair of the Global Women Leaders Committee of the World Business Angels Investment Forum.

President Grabar-Kitarović has been appointed a fellow at Sine Institute of Policy and Politics at American University in Washington DC, and will be teaching a series of seminars entitled Building Policy Consensus on the World Stage: the Pitfalls, Progress and Possibilities in the Spring Semester of 2021.

Kolinda Grabar-Kitarović was an exchange student and a graduate of Los Alamos High School in Los Alamos, New Mexico. In 1993 she earned a Bachelor’s degree in the English and Spanish languages and literature from the Faculty of Philosophy, University of Zagreb, and in addition completed elective programs in the Portuguese language and literature. In 1996 she completed a specialized annual program in diplomacy, international law and economics, as well as courses in the German and French languages, at the Diplomatic Academy in Vienna, Austria. In 2000 she earned her Master’s degree in International Relations from the University of Zagreb. From 2002 to 2003 she was a Fulbright scholar on pre-doctoral research in international relations and security policy at the George Washington University, United States of America. Consequently, she was awarded the President’s Medal for academic, social and political endeavors. She was also a Luksic Fellow in Senior Managers in Government Executive Program at the JFK School of Government at Harvard in 2009 and a visiting scholar at Johns Hopkins University in Washington DC in 2011. She has completed doctoral studies at the University of Zagreb and is currently working on her PhD thesis in international security studies, specifically on the responsibility to protect civilian populations from mass atrocity crimes.

President Grabar-Kitarović is a recipient of numerous awards and decorations, among which is the 2019 Fulbright Lifetime Achievement award for her “remarkable contributions as a leader, diplomat, and public servant.” She was awarded honorary doctorates from the Slovak Matej Bel University for International Relations and Economics, the Russian Plekhanov University of Economics, the Hungarian Corvinius University of Budapest, and the Argentinean San Pablo University.

In 2017 she was awarded the Collar of Mubarac the Great of the State of Kuwait and the National Star of the Republic of Romania. In 2018 she received the Portuguese Order of Prince Henry and the National Flag Medal of the Republic of Albania. During her presidency, she was named honorary citizen and received the keys to several cities around the world. She also received numerous other awards, among other, the “Isa beg Ishaković” international award (2015) and the “Evening News Award” (2018) for promoting European values and the EU accession process in the neighboring state of Bosnia and Herzegovina. She is also a recipient of the 2016 EBAN “Visionary Leadership Award,“ as well the “Paul Harris Fellow” of the Rotarian Club in 2019, the Trailblazer Award from Women Political Leaders, the 2018 Prix de la Femme d’Influence for politics, and the Global Woman Leader award from WBAF. She was presented with the Special Recognition for the Development of Inter-Religious Dialogue by Croatia’s Islamic community upon the completion of her term in office as President.

Kolinda Grabar-Kitarović was born on the 29th of April 1968 in Rijeka, Croatia. She is married to Jakov Kitarović, and is a proud mother of two. She is a native speaker of Croatian, fluent in English, Spanish and Portuguese and has basic command of Italian, French and German.

She is an experienced politician and national and international diplomat, with experience and expertise in geopolitical studies, the Trans-Atlantic relationship, the Western Balkans and Southeast Europe, European and Eurasian studies, relations with Russia, inter-faith and inter-cultural relations, post-conflict building and reconciliation, gender issues, global security issues and many other aspects of international relations and security policies.

She has initiated and organized, as well as participated in, as key note speaker and/or panelist, in countless security, academic, specialized and other public events around the world, and has written several articles and other pieces on national and international issues.